Private Sights And Tastes Of Siena 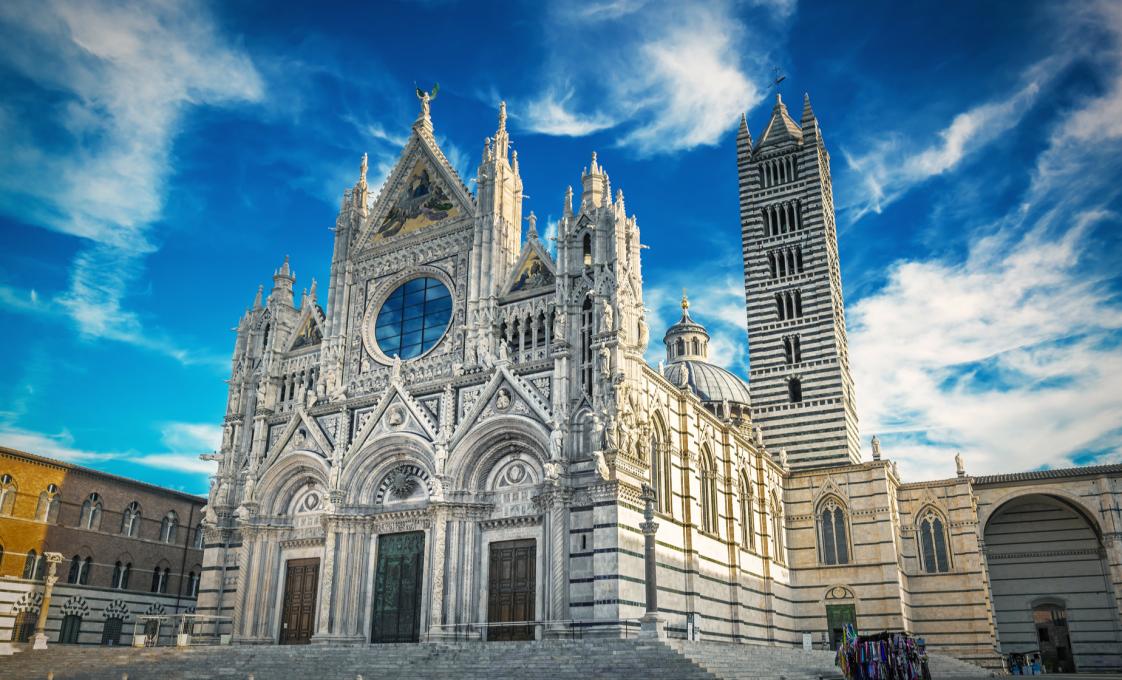 After meeting your private driver in Livorno, you will set off on the approximately two-hour drive to tour Siena. The town is a very beautiful, brilliant Medieval ensemble of buildings, plazas, and towers cast in warm, brown bricks. Its soaring skyline is its pride, dominated by the gothic cathedral (Duomo) and the taut needle of the Torre del Mangia.

Upon arrival, you will meet your professionally trained local tour guide who will show you the town. On this Livorno excursion, you will see the shell-shaped Piazza del Campo, which probably captures the most attention and fame. It has been seen in films, photographs, and advertising campaigns. It has witnessed many historic events, the most intriguing being the "Palio" horserace, first recorded in 1283, but which may have had its origins in Roman military training even earlier. In the Piazza on July 2 and August 16, there is a bareback horse race when mayhem takes over this small town and non-natives can observe local patriotism at its best and worst. Anything and everything will be done passionately to bring home the prize. The prize is the "Palio," a banner to be shown off with pride for the whole neighborhood it represents.

The piazza is bordered by elegant palaces, and has an elaborate fountain as its focal point. The Fonte Gaia has a rectangular marble basin and is decorated by statues. The remarkable Palazzo Pubblico still serves as the town hall.

Another of the many highlights of Siena is the Piazza del Duomo. With its huge cathedral (1136 - 1382), it is one of the most spectacular in Italy. The Duomo, as it stands, is a delight. Its style is an amazing conglomeration of Romanesque and Gothic architecture, its lineaments picked out in bands of black and white marble, an idea adapted from Pisa and Lucca, though here with extravagant effect. After your guided tour, you will have plenty of free time on your Livorno excursion to explore on your own and have lunch at one of the charming cafes.

After the break, you will visit the Italian version of a delicatessen, the salumeria, which means "cured meat shop." The origins of the salumeria stretch back to the ancient Romans, who first developed curing methods out of practical necessity, simply using air, salt, and smoke to preserve meats in those days long before refrigeration. As time went on, the Italians elevated curing to an art form. Different combinations of curing techniques and spices, combined with regional peculiarities and attention to where and how their livestock was raised, resulted in an infinite variety of "salumi," cured meats. All of this culinary history, over three millenniums' worth, comes together in the many salumerias, which can be found throughout Italy. Some are small village shops that sell house-made cured meats and cheeses unique to their region or even to the village, and others are extensive affairs carrying a king's selection of the finest and most revered of Italy's food products.

You will be met by the owner of a salumeria who will give you his personal welcome. He was born and raised in Siena and enthusiastically continues the family tradition: the preparation and curing of pork products. His products are prepared according to the recipes of another time, the same ones of more than 80 years ago. The aroma of pepper, spices, and aromatic herbs announce the preparation of the meat. After a chance to sample some of his creations, you will begin the two-hour drive back to Livorno.

We are experts in providing exceptional shore excursions. We understand that in today's fast paced world, vacations have become an increasingly important way to relax, reconnect with family and friends, and experience new and interesting places. With this in mind, we provide the highest quality tours by performing extensive research, and detailed reviews. While other companies also offer excursions, we strongly believe our expertise and approach set us apart. The large cruise lines sell shore excursions - typically in very large groups visiting high traffic sites. We focus on smaller groups visiting more interesting and authentic locations using more personalized local operators. While the cruise lines are experts in delivering cruises, we are experts in delivering shore excursions.

Our Approach
We believe quality service is not only highly valued by customers, but ultimately leads to better experiences and higher satisfaction. Unlike the cruise lines and other tour companies that rely almost entirely on websites, we encourage customers to call us. We want to invest our time answering your questions, providing input, and selecting the excursions that best meet your needs.

Our Tours
Our goal is to provide customers a wide array of exciting, appealing, and enriching tours. For those customers who prefer to travel in smaller groups with more personalized service, we offer a wide variety of small group tours around the world. These tours generally range in size from 2-12 people compared to larger tours which can number up to 50 people. While exploring the destinations and ports on this website, feel free to search for these "Small Group Tours". For those customers interested in private tours, we offer many outstanding excursions that allow you to travel with your party alone and, in many cases, to fully customize your tour. Search for "Private Tours" if you are interested in this experience. Our "Scenic" tours provide up close and personal access to some of the most spectacular natural environments on Earth from majestic glaciers in Alaska to spectacular reefs in the Caribbean. Our "Cultural" tours allow customers to experience local customs, entertainment and culinary delights ranging from tribal dances in Alaska to an outstanding local meal in Santorini, Greece. Our "Active" tours offer a multitude of exciting and adventurous ways to experience our destinations. Our customers can kayak the turquoise waters of the Caribbean, hike to a spectacular waterfall in Hawaii, or bicycle through quaint villages in France. Our "City" tours allow travelers to see the highlights of great cities around the world with unique insights provided by our expert tour guides.

Our People
In our experience, exceptional travel experiences are almost always delivered by exceptional people. With that in mind, we utilize a comprehensive approach to select and employ the leading tour guides and tour providers around the globe. We hold our people to very high standards which we measure by our comprehensive Quality Control process and, most importantly, by our customer feedback, which we will actively seek from each of our customers.

Our Owners
Shore Excursions Group is owned by seasoned travel executives possessing extensive experience across many sectors within the travel industry.

Michael Bonner
Mr. Bonner has over a decade of experience working in the cruise industry in a variety of roles for both Royal Caribbean Cruises Ltd. and Viking River Cruises. Most recently, Mr. Bonner was the Chief Operating Officer for The Scholar Ship, a Royal Caribbean program aimed at providing college students onboard educational programs in conjunction with enriching shore excursions around the world. Mr. Bonner also helped co-manage Viking River Cruises U.S. Operations, and he ran the corporate, strategic, and deployment planning functions at Royal Caribbean. While at Royal Caribbean, Mr. Bonner was responsible for forming Royal Celebrity Tours, Royal Caribbean's land-based tour operation in Alaska, which takes cruise passengers on multiple day tours through the interior of Alaska either before or after their cruises. Prior to working at Royal Caribbean, Mr. Bonner was a consultant for Booz Allen & Hamilton.
Less
from $260.00 (USD)
Per Person
Contact Us
Tour Type
Private
Group Size
Private
Activity Type(s)
Cultural, scenic
Tour Duration
10 Hours
Activity Level
Moderate
Tour Leaves From
The Cruise Pier.
Food/Beverage Provided
Not Included
Special Instructions
Comfortable clothing and flat-soled, closed toe, sensible walking shoes are recommended. Sunscreen and sunglasses are suggested.
Restrictions
Walking in Siena is over cobblestone and paved surfaces, many of which are uneven and at an incline.
Terms & Disclaimers